Tush, none but minstrels like of sonneting!
Love’s Labor’s Lost 4.3.155

Started in 2004, the UNC Charlotte Sonnet Slam has become a regular Fall semester event. For the past three years, faculty, students and Charlotteans have come together at Ritazza Cafe in Fretwell for a night of poetry, patronage and performance. This coming year's Sonnet Slam is slated to include poetry readings by faculty from UNC Charlotte and other area schools, a sonnet-inspired performance by local hip-hop artist "Black Sun," and a melange of early-modern fare including Medieval Ginger Bread, Bryndons and Persian Mint Water.

Like many Renaissance professors around the country, we routinely use lectures and class discussion to teach students about identifying, scanning, and interpreting sonnets; however, as our students often remind us, they learn best by doing. In encouraging various modes of composition (off site and on), the Sonnet Slam gives students the opportunity to play the sonneteer, and in so doing builds a working familiarity with and an appreciation of the sonnet’s subtle complexities. Moreover, composing sonnets in an extracurricular atmosphere helps to reduce the inevitable anxiety at being asked to master seemingly archaic poems in the often “high stakes” formal classroom setting. Rarely do students in the classroom produce quatrains as quickly and effectively as the following, penned by one of the coteries in our most recent sonnet slam:
Your gold puffed sleeves portray a man of ease
Masculine you stand up above the rest
Our watching eyes your costume does so please
That all of us are jealous of your dress. (“To Sir Andrew Hartley” ll.5-8)
As students negotiate word choice, syntax, and rhyme together to form playfully fawning quatrains like this one that are geared towards capturing their patron’s attention, they engage in a setting that encourages a form of inquiry-oriented learning.

During the course of the Sonnet Slam’s three hours, students come to appreciate the sonnet’s political and performance-oriented contexts as well. In being rewarded with “ducats,” they experience the economic workings of patronage, how in sixteenth-century England the whim of a noble lord or lady could easily advance or thwart the ambitions of an aspiring courtier poet. At the same time, the evening’s events collectively reinforce the fact that sonnets were (and can still be) alive in both time and space. Our Renaissance costumes convey the visual splendor of the period’s nobility; and the range of patron personalities (each patron doing his or her best to stay in character all evening) makes tangible a period of literary history that often feels irrevocably gone. And as students respond creatively to pictures of objects and people from today, they develop a sense of how this poetic form might still have relevance in their own historical moment. Throughout the evening, sonnets are never read in isolation or in silence; instead, students and faculty read them aloud to their coteries, to the officiating patrons, and to the larger assembled audience, helping students experience these poems as the performed texts that they originally were in the Renaissance. Student experience is thus enhanced by historicizing the extrinsic rewards of aesthetic/artistic production. 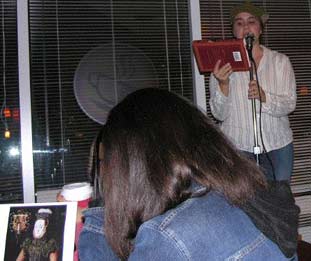 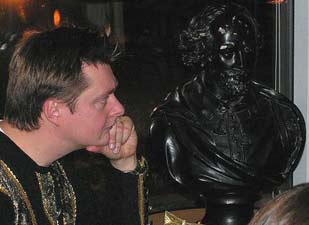